This project aims on investigating the influence of powder filling process and inhomogeneous initial density distribution inside the capsule on the final shape of a component. Those factors are subsequently considered to optimize the capsule design to achieve near-net-shape production with minimum distortion of hot isostatically pressed components. 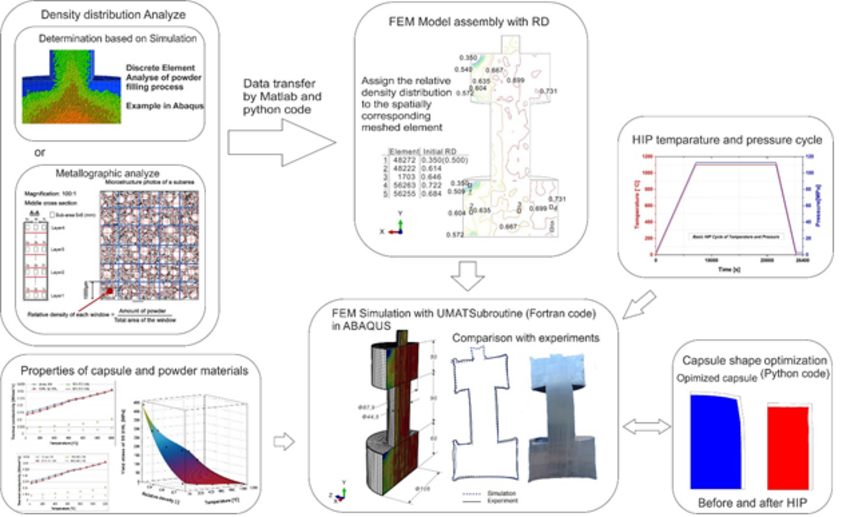 Hot Isostatic Pressing HIP has been used for a long time in industrial applications, especially to produce near‑net‑shape NNS components with improved material properties. In the Powder Metallurgical PM HIP process, a capsule made of sheet metal is filled with metal powder and successively consolidated by simultaneous application of pressure and temperature. The capsule design plays an important role in the process chain, as the capsule’s shape and size as well as the densification of powder inside the capsule determine the final geometry of the part. The production costs and design time can be much reduced, if a HIP simulation tool can be applied to replace the long and costly “trial and error” method.

To predict the anisotropic shrinkage and provide instructions for achieving the NNS components during HIP, an integrated optimization tool has been developed by employing an ICME-based methodology. Firstly, after filling the initial powder relative density distribution in side of a capsule is obtained either by discrete element method DEM calculations or metallographic analysis. This in turn generates an initial density field of the powder distribution, which can be implemented in the FEM model by assigning the density distribution to each spatially corresponding meshed element using Matlab code. In this way, the anisotropic shrinkage of the hot isostatically pressed capsules can be predicted precisely by the HIP simulation tool. The densification model, which integrates plastic, primary and secondary creep deformation mechanisms in the whole temperature and pressure range, is implemented using UMAT subroutines (Fortran code) in the commercial FE-software ABAQUS. The deformation and the density distribution are simulated in macro-scale with the properties of the powder and capsule materials. The simulation outcomes are implemented into an “Optimization tool” (Python code) to optimize the capsule design. After several iterations based on the validation using experimentally HIPed demonstrator components, capsules can be optimized and applied to industrial production to achieve NNS components.